The first quick impression when looking over the photo's of Pépé Smit will be that of very sweet pictures. However those who take a closer look will see a different world emerging. The more darker side of the images will reveal itself to you. Cynicism, humour, sexual references, taboo's, they all start to stare you in the face. The longer you observe the image, the harder it will throw itself back at you. For example the pin-up with the long blond hair; at closer range you will see that the hair grows from her armpit.

Smit shares the vision of Schopenhauer on boredom, pain and happiness. ‘Boredom’ as a lack of suspense and excitement is seen as the most dreary state man can get to. Love and cruelty are also inseparable. Smit loves to play with these issues in a very ordinary setting. She has a keen eye for the common character of these mechanism's which reveals itself much stronger in her portrayals (images) than for example in a SM-room. Like in her image ‘Brand’ where innocence and quilt see eye to eye.

With pleasure Smit explores the clichés and taboo's of our society. Clichés as the innocence of children, feminine beauty, motherhood and art itself are all being tackled. Her own version of ‘Déjeuner sur l'herbe’ set on an alp and the woman in a pretty dress with pink roses do indeed refer to Allen Jones figure of a woman as a drawing room table.

With obvious pleasure and viciousness she plays with the keen eye of the spectator. The contradictions in issues as quilt & innocence, sweet & vicious, lust & punishment which emerge in her work, are all fascinating and alluring because it seems to touch a deeper layer in our consciousness. 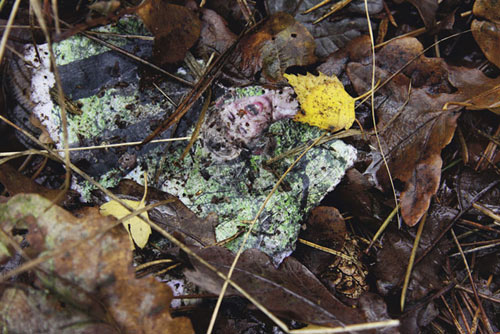 > To the project "In the Woods"

The nature of nature

What is the nature of nature? Is it the magical place where I buried all those dead animals, built tree houses, spent hours on my own, pretending to be an animal myself, at a time when nobody ever asked where I had been? Where I encountered incomprehensible but exiting half rotten dirty books and their weird presentation of the secret world of grown ups? Is it the place I go for a walk on Sunday? Something I would like to view from my hotel room? Or is it a dark place where animals cruelly eat each other? Where the Cynipid wasp lays her eggs inside the brain of a caterpillar that will not die but carries on living, providing the baby wasps with food for a long time. Where large aggressive groups of chimpanzees attack smaller chimpanzee groups to beat them up, rip their baby-chimps apart and eat them. Yes children: that's nature too. A place in which one would rather not get lost, especially not after dark.

As a child, nature was presented to me as some divine master plan, a complicated puzzle where everything is in miraculous but delicate balance. I am still shocked when confronted with the dark side of nature. And what about the nature of women? With their periods, giving birth to children and their overall emotional wildness, the nature of women is supposedly naturally close to the nature of nature. Women want to run naked through the woods. Only, if you do so, it really hurts your feet. I know because I tried. I guess I am not really a natural woman.

When I walk around in nature, mostly on shoes in the woods around the Veluwe, I do not feel the harmony people are supposed to feel in nature. I feel surrounded by decay, inhaling the smell of rotting leafs. For me there is no relaxation, no carefree joy, or anything like that. I feel impressed, a little scared, excited, afraid of getting lost, not finding my way out before it gets dark. And most of all: I am always afraid of finding a dead body. This is rather unlikely, I know that. But I always feel I have to watch out.

Apparently I like that uncanny feeling, because I keep returning to the woods. I go there all the time. I love nature. But I certainly do not think it loves me.

The drawback of Andy Warhol's famous "15 minutes of fame", that would await us all in the media age, is of course the inflation of "fame" itself. Almost daily we are confronted with the ultimate democratization of fame on our television screens. The consumer-viewers are interactively judging shows filled with dilettantes or supposedly upcoming talents that are being fed to them as camera candy. Consequently, the relationship between fame and craftsmanship or artistic talent has been altered significantly: the place where the trick is performed has become more important than the trick itself.

This place is media land, with its own rules that have little to do with artistic quality. For the new idols of our time easy accessibility has become a must – the journey from pop art to mass consumption of events is as logical as it is inevitable.Now that literally everyone can become an idol, due to the whimsicality of the media and the consumer, the question arises of the effect this has on our desire to imitate our idols – on the dream of becoming a star.

In the POPPY DOLLS project (the basics of pop existence: record sleeves, video clip, CD, song text) Pepe Smit investigates this desire. One could say that she gives shape to a place where that desire can still be found. A place quite contrary to media land with all its glamour. On the record sleeves the troubled pop star’s focus is introspective: the pictures do not represent the realization of an actual future, but rather the memories of the dream once so cherished. Desire has lost its innocence, a recurring theme in Pepe Smit’s work, which often focuses on the harsh, painful or perverted flipside of seeming innocence. But there is more to her work than that: it is not melancholic, but playful and provocative. POPPY DOLLS does not express the realization of an unachievable desire in an accusing manner, but rather as a desire in its own right: shiny, polished and styled, combined with an illusion of triumph – pounding strongly against the cliffs of reality, so to speak. It’s this attitude that gives Pepe Smit’s work a rebellious yet vulnerable quality again and again - like someone roaring against the storm: